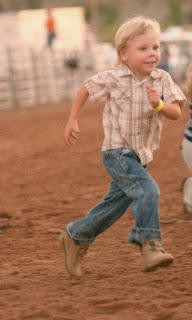 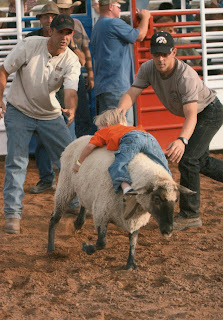 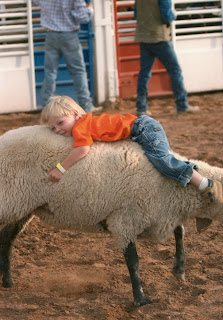 It was sooo cute to watch the kids ride the sheep.
Some were so little and all very brave ! Our Eli
did-not even hesitate. He hung out in the corrals
sittin on top of the fence so he had a front seat
and watched as some of the kids just didn't want
to do it. I understand !

When his time came, he just climbed right on. They
gave him his choice of sitting forward or backwards
and his choice was backwards, it did seem the back -
wards kids were doing a little better at "hangin on".

Slap the sheep and off he went. The crowd CHEERS !
Down he goes ! The announcer says, give that kid a
hand, what a hot dog ! Look at that smile ! Eli
was just one big happy smile walking back to dad.
He got alot of high fives and good job pats on the
way. He had fun and he was proud.

I soon found that he had been stepped on by that
"big old mean wool ball" and his new fair shirt
had a big rip down the shoulder/back side. I walked
him to the trooper to change his shirt and apply
Triple Antibiotic plus pain relief to his hoof scrape
welt. His smile was fading as he looks at me and say's,
mom, I should have known better - now i'm going to die.
I just busted out laughing and said "no one is going to
die (his welt scrape must have been stinging some). He
never cried over it and his new shirt and smile were
back on in time for the goat ribbon pull. He asks every
day if it's time to do it again.

The Duchesne County Fair had something for everyone. It
was a great week, the events were so much fun and the
people friendly and nice. I entered 6 digital photos
and won 6 first place blue ribbons. I can't wait til
next year either.

I loaded pictures in backwards of course !
Posted by Utah Tourist at 2:00 PM 2 comments: 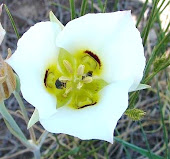